Over the past week, I’ve been realizing how much I have to be proud of this year. My friend who goes by Mudlips over at Peregrination inspired me to post a year in photos like she recently did. I thought it would be tough to fill up the year in photos on both this blog and Bookish without having holes—I was wrong. There were times I was doing more booking than biking, or more biking than booking, but I managed to get at least one photo per month this year of both.

I babysat Lily’s Xtracycle the first few months of the year. I only ended up riding it about four times, and I never had reason to haul anything, but at least it was in good hands while she was in Germany. I didn’t even remove the narrow saddle that made me wince every time I rode it. This photo is from an outing to Bar Carlo, my favorite restaurant that is relatively close to me.

Under the inky cover of night I assisted with installing a series of bike rack cozies at Bertie Lou’s Cafe in Sellwood. A knotty yarnbomber named Lefty O’Shea has created a number of similar installations across Portland, which aim to tie in with the adjacent business. For example, Bikeasaurus got a bike rack cozy that had a dinosaur spine, and the cutesy decor at Bertie Lou’s was honored with roses on top of this series.

I was mostly in the throes of working on my MPub project report titled Publishing to Inspire: The Role of Publications at Adventure Cycling Association. On this sunny day I managed to take the Xtracycle for a spin over to the Woodstock Library. I also discovered that I could wear my hair sticks if I used my Union Jack helmet, as shown. A good discovery!

Work on my project report was coming to a close, and I got myself a bikish graduation present: I signed up for Adventure Cycling Association’s Introduction to Bike Touring course. In celebration, I took Sweetpea due south along the I-205 path until we got to the bridge at High Rocks. The bridge was still closed for some construction, but I had never traveled that far south on that deplorable multi-use path. It would not be the last time I would do so this year.

April was also the month I decided to forge ahead by myself in my biking activities.

In May I enjoyed my first solo bike overnight trip. Wrote about it for the Bike Overnights blog (My First Solo Bike Overnight: Champoeg State Park) which then got chosen by Mac as one of the Top Five Bike Overnights to be used whenever they want to market or promote the site. W00t!

It was also the first time I got to see the exhibits at the Champoeg visitor center—exhibits that I helped develop in 2004. Working on that project was how I met Marie Naughton, who has since become my mentor and one of my best friends.

Emily and I biked to Metzler Park near Estacada for an overnight trip (The Adventures of Lycra Grrl: Traversing to Metzler with a Ninja). 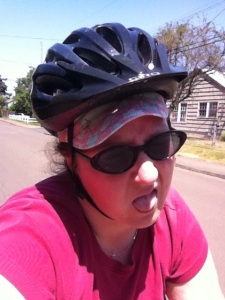 In preparation for my bike trip I climbed Mt. Tabor, Mt. Scott, Rocky Butte, rode the 40 miles from my house to Kelly Point Park and back (on the way home, above), got some mechanical issues solved, and the last few days of July I was on my bike trip.

Bike trip (The Adventures of Lycra Grrl: Certified Excellence in Bicycle Touring)! Oh, but it was great. The people were interesting and nice, we had a good route, and I experienced parts of Oregon I’ve not been to for decades, if ever.

Completed the pronunciation guide for this project. Greg had bandanas made earlier in the year, but when he knew Adventure Cycling was to start selling “Bikelingual” T-shirts, he asked for me to do a little more research and come up with a pronunciation guide that would ship with the shirt.

Diana (Zippy Diana Finishes her Trip) visited Portland and we did the Brewcycle Tour (Brewcycle Portland and the Triumphant Return of Diana), during which we just happened to run into a pair of cyclists making their way from Seattle to Utah.

This month’s biking mostly took place in the rain. But this fall I hiked much more than I biked.

First guest blog post for Adventure Cycling (Winter Tips from a Rain Expert)! This photo is one of the “DVD extras” I wanted to include in that blog post, but didn’t.

It looks like the next year will bring a couple more guest posts for Adventure Cycling Association, but beyond that, things look hazy. My housing situation is problematic, to put it mildly, and my time is increasingly crunched. Even if I can get out on my bike, I may not be able to document it as thoroughly as I’d like. Only time will tell.